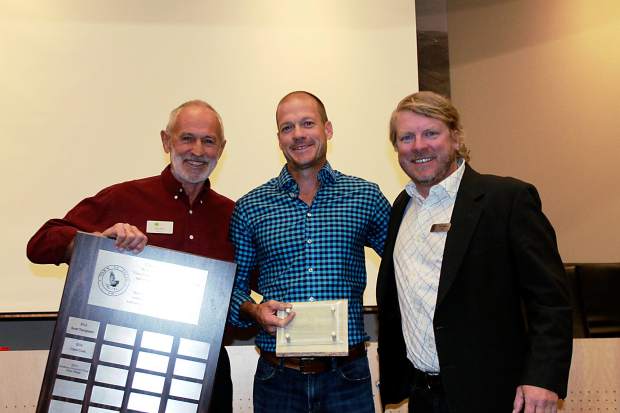 EAGLE — John Shipp, owner of The Dusty Boot and Luigi’s Pastahouse, is the winner of the 2015 Eagle Community Impact Award.

John Shipp is a founding partner in the RoadHouse Hospitality Group that owns and operates 18 restaurants around the state. He was nominated for the award by Eagle Chamber President Mick Daly and 2014 award winner Chris Cook.

The Community Impact Award was launched by the Eagle Town Board last year to honor a “town of Eagle individual, business or organization that is making a tangible, measurable impact on the community.”

In his nomination, Daly noted Shipp “is known around Eagle County for his generous support of nonprofits, sitting on their boards and supporting fundraising efforts.”

“Although John is not an Eagle resident, his positive influence has been felt in our town for many years,” said Daly.

Cook’s nomination noted “John Shipp has had a major impact on the town of Eagle.” He cited how Shipp’s reigns have been the center of activities for many events and credited him for supporting “almost every special event that is his ask to help out with.”

Daly added that two of Shipp’s employees — P.J. Berg and Cameron Douglas — have been highly involved with Eagle’s marketing and events efforts.

“The Dusty Boot and Luigi’s have supported many nonprofits and events with food, beverages, space and other donations,” said Daly. He also cited Shipp’s involvement in the Eagle Chamber’s co-working project. The Simpati Co-Working space is located on the second story of Shipp’s Dusty Boot building.

Shipp was recognized with the Community Impact Award during this week’s Eagle Vision 20/20 event.