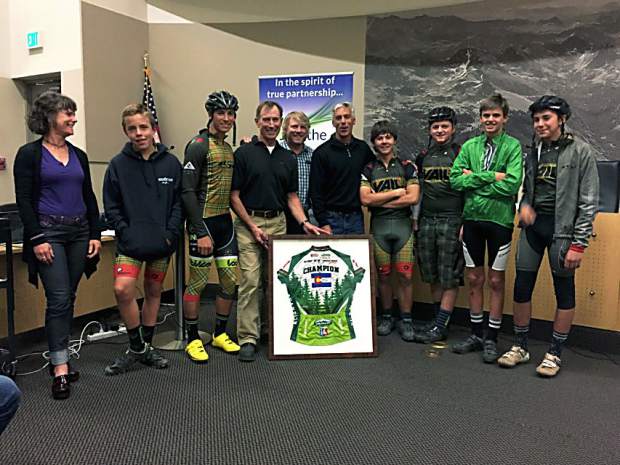 Eagle’s inaugural Community Impact Award was presented to Scott Turnipseed and Chris Cook in recognition of their efforts to bring the Colorado High School Cycling League competition to town.

The two men’s efforts eventually resulted in construction of the popular Haymaker Trail in Eagle, which played host to the league championships last year — an honor that will be repeated next weekend.

“They planted the seed for a high school race here in Eagle years ago,” said Eagle Mayor Yuri Kostick.

The Community Impact Award honors a Town of Eagle individual, business or organization that is making a tangible, measurable impact on the community. In the case of Cook and Turnipseed, they began lobbying Colorado High School Cycling League Director Kate Rau five years ago. Through their efforts, the community learned it didn’t really have the type of trail it needed to attract the high school league, so Eagle teamed up with the developers of the proposed Haymeadow project to construct a new trail that would meet the league’s specifications.

“Truly, of all the stuff I worked on while I was a member of the town board, it is so rare to have a win/win/win project,” said Turnipseed. “But that trail is something the locals use and it helps with our efforts to promote recreation based tourism and its also works for the mountain bike kids.”