Create an Account - Increase your productivity, customize your experience, and engage in information you care about.

In 2007 Jay Lucas approached the Town of Eagle Trustees with a proposal - the construction of a new BMX track in Eagle using all volunteer labor. The Trustees gave Jay the go ahead for temporary use on Town property near the Pool and Ice Rink. After countless volunteer hours the track was completed in 2009, with Jay leading the charge with his own equipment purchased specifically for the job. 2019 marks the 10th year anniversary of the realization this dream and exemplary level of commitment to the community.

Tara and Kat have both been instrumental in the creation of the art scene in downtown Eagle, Tara founded and runs ARTSPaCE, a workshop and gallery on Broadway and Kat Conner recently opened Katch of the Day also on Broadway, a new wine and vintage marketplace. Tara and Kat have been instrumental in the success of Eagle’s monthly ARTwalk. Beyond running businesses and hosting community events, both are contributing to the success of Broadway Street and downtown. 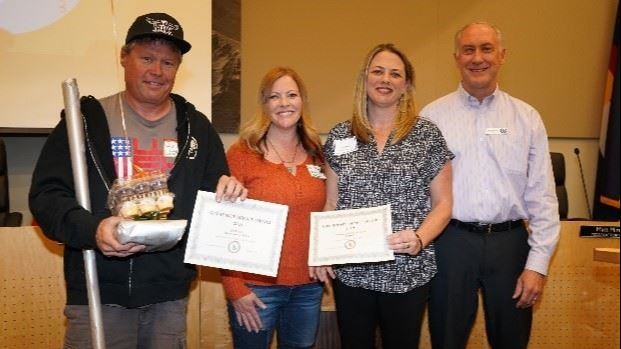